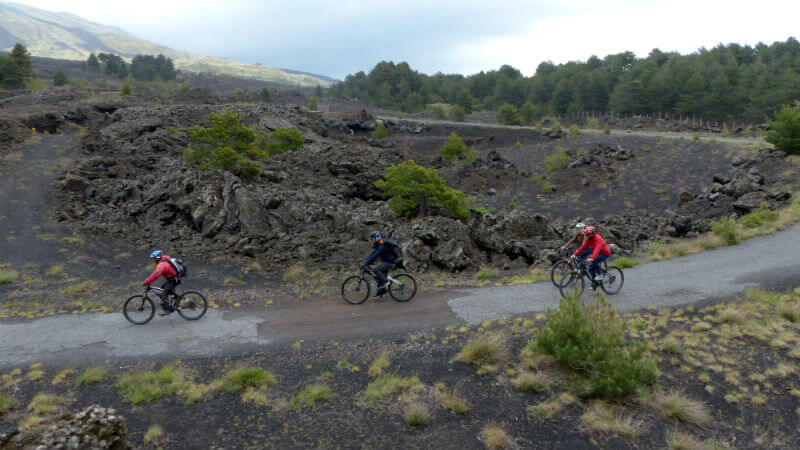 Meet: at 10:00, delivery of equipment, bureaucratic formalities, latest information from the volcanological bulletin of the NIGV of Catania and delivery of tickets.

On this trip we will cross the lava flows of 1983 and 2001/02, going alongside the impressive “Barbagallo” crater cone, to touch the lava from the spring of 2017, and finally we will be facing the Valle del Bove.

The Valle del Bove is a large depression of about 40 square kilometers, and it is thought that its formation is due to the collapse of ancient eruptive centers, dating back to an age before Etna as we know it today. It is a desert landscape, covered with lava flows, the most important and impressive of which date back to the 1991/93 eruption, and some more recent, from the eruption of 2017. Its perimeter measures approximately 18 km, and it has north and south walls of variable height, between 400 and 1000 meters.

In the east, however, an almost flat area opens up, interrupted by Monte Calanna, a crater that separates the Val di Calanna from the Valle del Bove.
In addition to Monte Calanna, there are some adventitious craters, such as Monte Simone (eruption of 1811/12), and Monte Ritmann, dating back to 1986/87.

The genesis of the Valle, according to several studies, is not traceable to a single event but to a series of collapses, the last of which must have taken place about 9,000 years ago.

This website uses cookies to improve your experience while you navigate through the website. Out of these, the cookies that are categorized as necessary are stored on your browser as they are essential for the working of basic functionalities of the website. We also use third-party cookies that help us analyze and understand how you use this website. These cookies will be stored in your browser only with your consent. You also have the option to opt-out of these cookies. But opting out of some of these cookies may affect your browsing experience.
Necessary Toujours activé

Any cookies that may not be particularly necessary for the website to function and is used specifically to collect user personal data via analytics, ads, other embedded contents are termed as non-necessary cookies. It is mandatory to procure user consent prior to running these cookies on your website.